A writer of romance imagines countless scenarios for their hero and heroine to meet and fall madly in love with each other, because despite all else, the relationship is central to the story and it has to be perfect.

I remember as a young child reading the romantic fairytales over and over again and they thrilled me all the way down to my little bare toes. My favorite? Beauty and the Beast and it remains my favorite to this day. I loved the way this unlikely couple worked through a very rough beginning and in spite of all the obstacles placed in their path, they found their happily-ever-after. Snow White, Cinderella, Rapunzel, and the Swan Princess, (to name a few) all managed to find their own happily-ever-after as well and I was content when I reached "the end."

So, I’m sure, you can imagine my delight when I find a few such stories when I’m digging around in my own family history...

I thought it might be fun to share some of them with you from time to time. So... I'll start with this one today.. 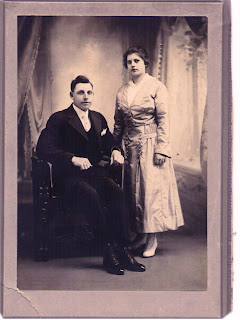 Edward Harvey Buskirk was born March 28th, 1893, in Allen County, Indiana. He was the son of John Truman Buskirk and Margaret Lillie Wallace. Edward worked hard all the days of his life—he had to work hard, for his father passed away when he was just six months old. John left behind his widow, a set of twins from his first marriage to Lillie’s sister, Ruth, and Edward. The surviving members of this little family had to make ends meet and so they farmed the land. When it came time to harvest their crops, Ed had to forgo his schooling and work the fields. Each grade accomplished took two full years. Despite his fervent desire to be a doctor, he never made it past the sixth grade.

Somewhere along the way, his gaze fell upon the very lovely Florence Elenora Henry. , daughter of William David Henry and Nora Jane Earl, was born on the 8th of September, 1898, in . William, a prominent citizen of , provided very well for his five children. They wanted for nothing.

And then one day, the church they attended decided to have a fundraiser. The single women of the congregation would prepare a picnic box lunch and the single men would bid on the basket of their choice. The highest bidder not only won the basket, he also won the company of the woman who prepared it. Together, they would share the meal.

Edward wanted Flo's company. So he used every dime he had, to win her basket. His rival, “a straight-backed” school teacher, ran out of money first (thank heaven...).  The rest, as they say, is history. Despite the differences in class and education, this couple fell deeply and completely in love. And that love did naught but grow over time. 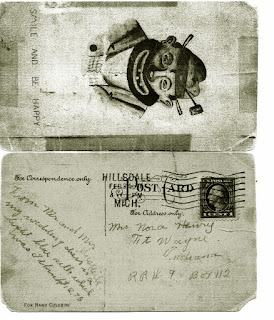 Family legend tells us that her parents were not exactly thrilled with her choice (as the postcard seems to bear out). And so one night, with the assistance of her sisters, tossed her luggage out the open window of her two-story home, climbed down a ladder, and into the arms of her future.  She and Edward crossed the border into , and on the 24th of February, 1916, they were married.

They had many obstacles to overcome, just like the Beast and his Beauty. They would know their share of hardship and sorrow. Yet they also knew joy. Together they produced nine beautiful children, twenty six grandchildren, and more greats, and great-greats than I have room to count. Edward and Florence are gone now. But I believe that somewhere, they are still living their very own Happily-Ever-After...
Posted by Debbie Peterson at 9:33 PM