Kristy Centeno's "Call of the Wolf" 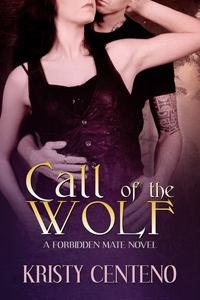 Blurb
When desire battles with the forbidden and passion overrules obligation, at the end of the night, which will win?
Victoria Bonvalet, a purebred werewolf, has no desire to mate to an alpha not of her choosing and after a one of a kind encounter with the mysterious blood lord Tristan Garland rattles her existence, she knows that she could never share any part of herself without love being the number one incentive.
Tristan, a vampire of over a thousand years, no longer cares much for the world or the creatures inhabiting it. But when he meets the beautiful she-wolf invading his deep woods territory, he realizes that it’s never too late to find your perfect match, even if she belongs to the opposite branch of all mythological beings. But even as they begin to explore their in-depth feelings for each other, can they find a way to be together without starting a war between two enemy species?

Even as she took several steps towards her car, Victoria could still sense it getting closer. The scent emanating from this being wasn’t one she was used too. It was different, unique somehow. It was not unpleasant by any means, just different. The incredibly fast speed in which it traveled was another clear indication of its supernatural origins. No human on earth could move that fast. Victoria was certain of two things, this being wasn’t human and neither was it a werewolf. Then what could it be?
Victoria refused to be afraid even though she did not comprehend the nature of this being. It was different from what she was used to. All she had to do was identify what it was. Normally, she would rely on her keen sense of smell for that, but since she didn’t recognize this scent, it was nearly impossible to pinpoint what it was. The only supernatural creatures she was familiar with were her own kind, werewolves. But this thing hiding back there was no werewolf, of that she was absolutely sure.
Once Victoria was close enough to her vehicle, she stopped and turned to face the woods. It was dark out but she could see her surroundings very clearly. A slight breeze picked up, bringing this unknown being’s aroma in to fill her nostrils. It was strong and male, very male. If this being were a werewolf he would most certainly be an alpha, a powerful one at that. But this was no huge puppy, this was something else.
Victoria surveyed the area with her eyes. So far she detected no movement which meant this thing was still too far away to see. But it was getting closer by the second. The speed in which it traveled made her slightly uneasy. Werewolves were known to move fast but this thing moved faster still. She could sense it moving, gliding through the forest as if it was flying. She was utterly amazed by it and she hadn’t even seen it/him yet.
Victoria waited, her eyes focusing in on her surroundings. Her she-wolf abilities ready to strike if this thing presented itself to be a threat. She gripped her car keys tightly in anticipation of what would happen next. She waited patiently for it to show itself. She wasn’t looking for a fight, she didn’t want to ruin her outfit, but if push came to shove she wouldn’t hesitate. She was a she-wolf, therefore she was a fighter. She could defend herself quite readily. She didn’t need the pack to protect her despite her father’s beliefs.
Victoria’s eyes narrowed when she caught movement up ahead. At first, it seemed like one big blur moving from one side to another but then it started to get closer. The woods seemed to disappear as all she could see was this black and white mass moving towards her. She couldn’t make out any features because of the speed in which it traveled. Her entire body tensed as she readied herself for a fight. If this thing attacked her she would fight back. There would be no hesitation at all to use all her armor, and she was well packed.
Soon, the white mist finally appeared before her, a tall figure was now clearly identifiable. Victoria gasped as she caught sight of a man standing not twenty feet from her. She blinked several times to make sure her eyes weren’t playing any tricks on her. She noted, after opening and closing her eyes for like the tenth time, that there really was a man standing nearby. He didn’t move. He just stared at her with as much intensity as she was gazing back at him.
Even in the darkness encasing them both, she took in every distinctive feature of his. He was tall, as tall as the trackers from the pack usually were. Shoulder length hair as white as a hand full of snow framed the sides of his face. His eyes were a shade of blue so pale, they appeared almost translucent. Unusually whitish skin and a lean and well-muscled figure finished his physical description.
His inhuman eyes assessed her in much the same manner she did him. Victoria watched as the breeze toyed with his hair, bringing a few stray locks to caress his right cheek. Werewolves tended to have unique features but this being was unique even for her. His white hair, pale skin, and clear eyes made him look like a marble statue. Had it not been for the few strands of hair being tossed around his shoulders by the light breeze, she could have easily mistaken him for one.
“Who are you?” She managed to ask at last. “What are you?”
His eyes narrowed as she spoke but he said nothing.
“What do you want?” She asked angrily when she noted he refused to answer.
The man took several steps towards her then stopped. He cocked his head to one side as if he was having trouble hearing her. Victoria did not flinch or move as he approached. There was no need for her to back away like a frightened kitten. She refused to show any form of fear. Not that she feared him; she was more intrigued than anything else.
“I was once known as Tristan Garland,” His voice startled her; it sounded so deep and gruff that she couldn’t help but think that perhaps he used it very little.
“Once?”
He nodded.
“Why are you following me?” She dared to ask.
The being now known as Tristan eyed her with curiosity.
“I do not follow you.” His eyes narrowed as he glared at her. “You invade and hunt in my territory.” He stated simply. She couldn’t tell whether he was angry or not. His passive face revealed nothing of what he was thinking. “You are the one trespassing, not I.”

You can connect with Kristy at any of the following:
Web Site: http://www.kristycentenoauthor.com
Facebook: http://www.facebook.com/KristyCenteno
Twitter: http://www.twitter.com/KrissyGirl122
Other: http://booksbycenteno.com
Posted by Debbie Peterson at 4:21 PM