As far as guest blogs go, we have a "bye" this week in our "Spirit of the Knight" book tour (now available in both ebook and print, for those who were asking). Nonetheless, I still wanted to provide a place for your comments and tweets, and give you another opportunity to win our marvelous prizes (we can't have too many of those, can we now). Therefore, I thought this last Monday in June the perfect opportunity to Interview the very awesome, talented, Shandra Kay.

Now, just in case you didn't know, she is the artist who created "Prayer for the Fallen," the highly coveted, main prize in our current giveaway! (Breathtaking, I know! I have already ordered my very own copy and I can't wait to have it in my hot little hands!)


Those who have followed my blogs and book tours during the past couple of years know that I have used Shandra's talents often. She created the exquisite necklaces for the "Spirit of the Revolution" and "Van Locken's Witch" book tours, as well as the gorgeous cover for "Van Locken's Witch." She also created all of the art work and put together the book trailers for "Shadow of the Witte Wieven" and "Spirit of the Rebellion."

How about a wee bit of romance and history concerning Kilchurn Castle as we focus on the "Spirit of the Knight"?

Sir Colin Campbell, first Lord of Glenorchy, is credited with building a five-story tower house and a protective perimeter wall on the peninsula of Loch Awe, way back in the year 1440. Now even though it's officially recorded that Sir Colin--also known as the Black Knight of Rhodes for his prowess during the crusades--built the castle, legend states otherwise. Tradition tell us that his lady, Margaret, oversaw the construction of the magnificent tower during her husband's seven-year absence.

Read more »
Posted by Debbie Peterson at 2:00 AM 6 comments:

The Otherworldly Occupants of the Tower of London...

Spirit of the Knight Book Tour Continues with the ghosts that haunt the Tower of London...

Construction on the Tower of London began 944 years ago under the direction of William the Conqueror, after he won the Battle of Hastings. Soon after the victory, he sent an advanced guard into the city of London with orders to build him a fortress. By 1100, the majestic White Tower dominated the skyline. One hundred and seventy-five years later (give or take a few) Edward I would build St. Thomas's Tower as well as the watergate known today as Traitor's gate.

With almost a century's worth of tumultuous history, often whispered sightings of a ghost or two, shouldn't surprise anyone.

Of all the ghosts haunting the towers, the young sons of  King Edward IV and Elizabeth Woodville, Edward V and his brother Richard, the Duke of York, are in my opinion, the most tragic. After their father's death in 1483, the boys, then aged 12 and 9 respectively, were taken to the tower by their uncle Richard, Duke of Gloucester. Though Richard had been appointed to care for the boys and prepare Edward for his coronation as king,the Duke seized the throne for himself --and--the boys disappeared.

Read more »
Posted by Debbie Peterson at 2:00 AM 9 comments:

The Ghosts of Brodick Castle...

With "Spirit of the Knight" now in Audio, and narrated by the phenomenal Dawson McBride, let's take a look at the ghostly shenanigans at Brodick Castle.

On the Isle of Arran in the Firth of Clyde lies this magnificent--dating from the 13th century--red sandstone castle.


There is a long and bloody history involving this castle and its surrounding lands. In the fifth century, Gaelic invaders from Antrim arrived on the shores of Arran and built a fortress, thereby expanding their kingdom of Dalriada. By the thirteenth century, the Isle came under the rule of both Magnus of Mann and Dougal of the Isles. Throughout the centuries in between, wars and conflicts were common. In 1266, and by the Treaty of Perth, Scotland took possession of the land.

Spirit of the Knight on Tour Now through September 1st!

For all those who have wondered if sickness overcame me, if I went on an exotic vacation somewhere, or if the earth were truly flat and I fell off the end of it, I thank you so much for your concern. It is SO nice to be missed!

So the answer concerning my lengthy absence from my blog is (drum roll, please) I needed all of that time to prepare a variety of blogs and interviews (all sixteen of them...whew!) for my upcoming book tour featuring "Spirit of the Knight!" And that, dear friends, was quite a task! 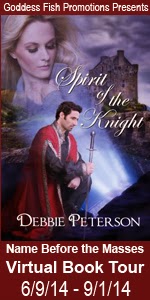 (To top it off, I also had to find time for editing book number six as well as spend some time on my current work in progress, but those discussions will have to wait for another time... ahem). Oh excuses, excuses....I know...but the dog really did eat my homework...I swear!