In Celebration of ARBOR DAY...

It's Arbor Day! And in case you didn't know, Arbor Day is a wondrous holiday which encourages individuals around the world to plant and care for trees. What better way to replenish our forests and beautify our homes and cities?

To commemorate this day, author Andrea Pearson thought it would be great fun to gather a group of authors that had ebooks referencing trees in one way or another and then offer them at a discount to all those who love to read.  Exciting stuff! These books will only be discounted for a limited time, so hurry over and check out her link!

You'll find "Shadow of the Witte Wieven" among the offerings because a great deal of the book takes place in the forests of Colombia. My publisher has graciously discounted this book through April 30, 2013.

What is it about?

Despite a contract on her head, lone Drug Enforcement Agent, Aliyana Montijo must ferret out a mole and stop the assassination of top DEA officials, as so ordered by the Colombian drug lord she seeks to take down. The task is a daunting one, for there is no one she can trust. No one that is, until she encounters a most unlikely ally.

Former seventeenth century captain of the Dutch West Indies Company, Wolfaert Dircksen Van Ness, now from a parallel dimension, encounters the beautiful agent during an unearthly storm in the Bermuda triangle. Drawn to the Spanish beauty he rescues, he pledges his assistance, despite her reluctance to accept either his help or his heart.


And because it's such a beautiful day here in Southern Nevada, I think I'll go plant another Sapphire Dragon tree (Paulownia kawakamii)... The ones I have are teeming with gorgeous purple flowers... 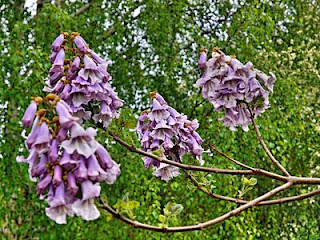 What about you? Do you have a favorite tree or Arbor Day tradition?

Sun filled days and flowers are all part of springtime, and how fun to have received both on the same day... 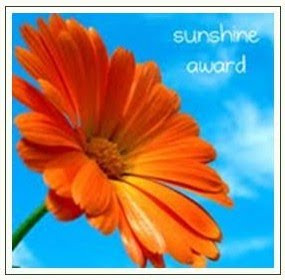 My good friend, the phenomenal Mae Clair bestowed upon me the Sunshine Award...
This is a fun award that bloggers give to other bloggers “who positively and creatively inspire others in the blogosphere.”  I am truly honored that Mae thought of me. If you've not yet discovered Mae's blog, here's your perfect opportunity. Her posts are always full of fun surprises, so drop by and let her know that you came. She truly appreciates your comments!
So...the rules of the Sunshine Award are as follows:
1.     Thank the person who gave you the award in your blog post (thanks, Mae!)
2.     Answer the questions below
3.     Pass the award to 10-12 deserving and inspiring bloggers, inform them and link to their blogs.

*And my own personal rule? Take a minute, broaden your horizons, and check out the blogs of my nominees and Mae's nominees! In so doing you'll find some interesting blogs and discover a few new authors along the way! If you feel so inclined, join a few! You'll be glad you did!

An Interview with C. David Belt, Author of ‘The Children of Lilith’ Series!

I am really excited to welcome the very talented author C. David Belt to my blog today. He has graciously allowed me to pick his brain and I think some of his answers to my questions might really surprise you!  So sit back and enjoy the ride!

What inspired you to write your first book?
A dark image in my head that just wouldn’t go away and the story of an active LDS wife and mother who contracted AIDS through a blood transfusion.  First, I had an image in my mind’s eye of a circle of vampires “ordaining” a new vampire.  But in my head, I KNEW the new vampire was being forced into vampirism against his will, and yet I also knew that vampirism was VOLUNTARY.  So I imagined the world’s first and only unwilling vampire in a world where vampirism is a choice.  (It took me ten years to figure out how that was workable.)  Then I heard the story of an active LDS mom who went into a hospital for a routine procedure, received a transfusion of tainted blood, and developed full-blown AIDS.  Through no fault of her own and because of the rotten choices of someone else, her life and the lives of her husband and children were changed.  She could have become bitter and railed against God.  However, she chose to face her drastically altered life with a positive attitude and she chose to rely on the mercy her Father in Heaven.  In her case, she received a priesthood blessing and was completely and miraculously cured.  However, it was her choice to face her trial with faith and charity that inspired me.

Read more »
Posted by Debbie Peterson at 9:27 AM 8 comments:

The Ghost Ships of Legend...

A noble (and did I mention handsome?) 17th century sea captain, Wolfaert Dircksen Van Ness, featured in my latest novel, Heart of the Storm, inspired me to write about "Ghost Ships..."

The Flying Dutchman...almost everyone recognizes the name. But did you know the moniker refers to the Captain of the ship, and not the ship itself?

According to legend, Captain Hendrick Van Der Decken set his course for Amsterdam. During the voyage he encountered a fierce, tumultuous storm while rounding the Cape of Good Hope. The tempest threatened to dash the ship to pieces and end the lives of all aboard. Despite calls from the crewman to turn the ship about, he swore an oath to round the Cape “even if it took him ‘til Doomsday.”

While giant waves hammered the ship, Van Der Decken smoked his pipe, quaffed his ale, and sang obscene songs. In a last ditch effort to save their lives, the crew mutinied. Enraged, the captain took hold of his pistol, killed the chief mutineer and tossed his body into the sea. In that same instant, the clouds parted, and from the heavens, a roaring voice accused him of obstinance.

In reply, the good captain said, “I never asked for a peaceful voyage. Indeed, I never asked for anything. So away with you before I shoot you as well.” Hendrick aimed his weapon toward the heavens. Yet, before he had the chance to use it, the pistol exploded in his hand. In that same instant, he was cursed to eternally sail the oceans with naught but dead men for his crew. They’d eat nothing but red hot iron and instead of ale, they’d only have gall to quench their thirst. Worst of all? The ship would never make port or know a single moment of peace.

The Ghosts of Chickamauga...

America’s battlefields are all quiet now and have been for well over a century or two, depending upon the war in which it took place. Most of the people visiting the parks and museums associated with these battlefields note feelings of reverence and serenity while exploring the grounds.

At least until the sun goes down...

During the Civil War, the bloodiest battles waged took place at Gettysburg, Antietam, Stones River, and Chickamauga. Therefore, it should come as no surprise that at the end of the siege, more than bullets and blood remained behind. We'll explore each of these battlefields in the days ahead.

The battle at Chickamauga took the life of an ancestral Uncle of mine, and figures prominently in “Spiritof the Rebellion.” In 1863, from the early hours of September 19th through the 20th, the combined casualties totaled 37,129 men. At the end of this horrendous battle, countless bodies of Union soldiers, left lying in the field for weeks, were finally buried in makeshift graves. Various reports tell us they buried the dead in rows, head to foot and more often than not, several men shared a grave. Not a single marker would ever note their passing.

Today, T. Michelle Nelson,  the fabulous author the of the Lily Drake Series, published by InkSpell Publishing, has stopped by to share a little bit about her unique writing process.  Her second book "Til Death Do Us Part" will be released April 24th, so add it to your TBR list and mark it on your calendar! You won't want to miss it! 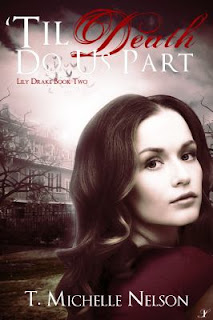 I’m not writing this article about the correct way to go through the process of writing a book, I’m going to write about how I do it.  LILY DRAKE was my first book to be published and ‘TIL DEATH DO US PART is only the second in the series.  I’m by no means an old pro at writing, but I will tell you what works for me.

Email ThisBlogThis!Share to TwitterShare to FacebookShare to Pinterest
Labels: Guest Posts, InkSpell, T.Michelle Nelson, Til Death to us part

Read more »
Posted by Debbie Peterson at 9:32 AM 2 comments: