Or…the version far more accepted today appears to have its origins in the 17th century. In this myth, Cantre'r Gwaelod is described as a lowland in which the citizens erected a dyke to protect the land from the sea. This dyke was known as Sarn Badrig and it had a series of sluice gates that were opened during low tide to drain away the excess water. Caer Wyddno served as the capital of Cantre'r Gwaelod and two princes of the kingdom were given the duty to oversee the dyke. According to legend, one of these princes, (the one named Seithenyn), preferred drinking and carousing with women to overseeing this very important duty. As a direct result, the dyke overflowed and carried Cantre'r Gwaelod along with all of its inhabitants to the bottom of the sea.

Well, men of science will tell you they can’t find any evidence at all that supports the remains of a kingdom as large as Cantre'r Gwaelod is reported to have been. However, William Owen Pughe, an 18th century Welsh antiquarian scholar didn’t have any problem telling the world that he did in fact see evidence of a sunken human settlement about four miles off the coast of Ceredigion. Then, Samuel Lewis, in the 1846 edition of The Topographical Dictionary of Wales, described a series of causeways and stones walls beneath the waters of Cardigan Bay. Oh, and one more thing, during low tide, Roman coins bearing the image of several emperors, various stones with Latin inscriptions, and prostrate trees have all been found...

So what do you think? If Cantre'r Gwaelod once existed, did it sink because of the neglect of either Mererid or Seithenyn or did mother nature have a her hand in it?

So why the posts of mythical underwater kingdoms in Wales? Because Court of the Hawk, takes place in a fictional lost kingdom of Wales, which also happens to exist beneath the ocean... AND, it is now available FREE in Audio for a short time only. Get your copy here before the promo codes are all gone! 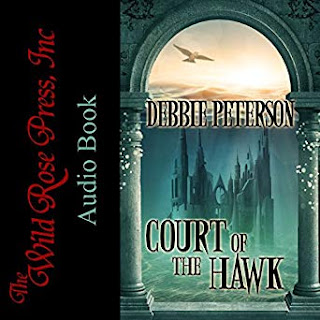 Posted by Debbie Peterson at 12:30 PM