Join us for the "Van Locken's Witch" Book Tour and Giveaway, February 24th through March 14th!

After a whole lot of "life-happens" during the past several months of my life, I am excited to finally announce the Blurb Blitz Book Tour for my latest novel, Van Locken's Witch... 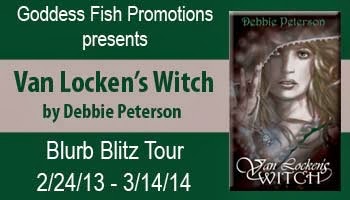 But before I give you the details of the tour, I feel compelled to give you a little background because, in the grand scheme of things, the 'prequel' does not come after the 'sequel.'  (I know...right?)

For those of you coming late to the party, I should tell you that I published "Shadow of the Witte Wieven" (the 'sequel') in April of 2012 through Inkspell—at that time, a brand new, up-and-coming publishing company.

This fun new company said they were looking for polished novels to publish and I just happened to have one I thought I could offer them. However, when I read their guidelines for submission, I discovered they were looking for novels of no more than 80,000 words in length. Mine exceeded that limit by about 33,000. So, I made the painful decision to cut out a great deal of the back story, submit it and see what happened. Several weeks later, the lovely founder and CEO of the company offered me a contract despite the fact the book still weighed in at over 100,00 words. Very gracious of her, wouldn't you agree?

Nonetheless...that back-story languishing on the cutting room floor haunted me. In my more whimsical moods, I just might tell you that Rand Van Locken and Lissa Capoen wanted their story told. And not only told, but told fully and completely. Not surprising really, Lissa is a witch, you know.

Anyway, Rand and Lissa finally talked me into putting my current "work in progress" on hold, pick up my pen and paper (translate...computer keyboard and microsoft word) and write their story. Once I finished the book, the lovely ladies at Inkspell allowed me the opportunity to update "Shadow of the Witte Wieven." This second edition now ties the two novels together a little more smoothly.

So, now that you have the background, on with the details of the tour!

Stops during Week One are as follows: 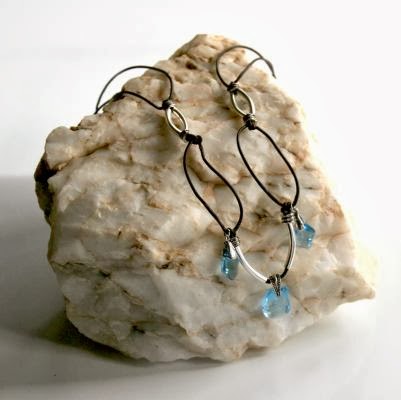 During this tour we will be giving away this exquisite necklace, inspired by Lissa's talisman, and created by the fabulous Shandra Kay especially for this promotion. All you need do for a chance to win is leave a comment at any one or all of our tour stops during the next three weeks. The more comments you make, the greater your chances of making this gorgeous necklace yours!  One lucky name will be drawn from my witches hat on March 15th, and the winner will then be announced on this blog shortly thereafter. The winner will also be announced at Goddess Fish Promotions.

In addition, I am pleased to offer you a 50% discount for Van Locken's Witch in the ebook format of your choice here, using the information found below:

Kapitein Rand Van Locken has no idea what awaits him as he boards the Spanish galleon on behalf of the Dutch West India Company, or that the beautiful woman imprisoned within will change his life in ways he never imagined or even desired. Until now..Lissa Capoen, didn't plan for the Spaniards to capture her while attempting to rescue the sister they kidnapped as bait. She didn't foresee the handsome sea captain coming swiftly to her aid and offering his assistance. She certainly didn't she expect him to steal her heart and claim it as his own.Yet, as destiny brings them ever closer together, Armando Manera is determined to recapture the witch and present her to the Spanish King. To accomplish that goal, he is willing to do whatever it takes...

Well, there you have it!  I hope to see you on the tour and all the while, I'll wish you the best of luck in winning that necklace!

Posted by Debbie Peterson at 5:19 PM