Splitfoot claimed he was the peddler who had been murdered in the house years before. When John Fox and a neighbor took to digging in the basement and found a piece of a human skull, it seemed apparent Kate and Margaret were in communication with the ghost of the peddler. By 1849 both daughters were hailed as mediums and were giving regular performances, showcasing their otherworldly skills. The Spiritualist movement was born, and the girls became celebrities.


Their fame spread, and in time, they were world renowned. Over the years, their skill would come under scrutiny. In 1888, Margaret Fox denounced Spiritualism as a sham, saying she and her sister produced the rapping sounds by cracking their toes. By 1891 she would recant her confession, and in 1893 would die penniless. Kate, likewise met a sad end, drinking herself to death and passing in 1892. The Spiritualism movement, however, would continue, and would attract such noted practitioners as Sir Arthur Conan Doyle.

I found the entire Spiritualist movement fascinating, especially the idea that many of the mediums were stage magicians who honed their skill on the “flim-flam” circuit. That’s not to say that there weren’t credible mediums (a topic for another post) but many of practitioners of the day were skilled con artists out to make dollar from the grief of others. This became especially true after the Civil War, in which an extraordinary amount of lives was lost. Those who remained needed assurance their sons, husbands, brothers and fathers had found peace beyond the Veil in Summerland. Mediums promised that communication with the dead to bring comfort.

For Cusp of Night, I’ve delved into the props that Spiritualism used by sharing how a medium of the day—Lucinda Glass, also known as the Blue Lady of Hode’s Hill—plied her trade. As a reader you’ll be introduced to table titling, rapping sounds, a medium’s spirit cabinet and spirit trumpet, ectoplasm, automatic writings, and a host of other tools common to spiritualists of the day. The research was utterly riveting. I hope you find the book equally engaging. 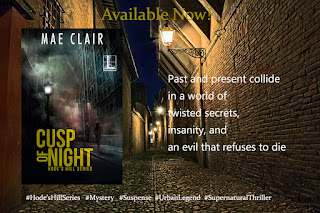 BLURB
Recently settled in Hode’s Hill, Pennsylvania, Maya Sinclair is enthralled by the town’s folklore, especially the legend about a centuries-old monster. A devil-like creature with uncanny abilities responsible for several horrific murders, the Fiend has evolved into the stuff of urban myth. But the past lives again when Maya witnesses an assault during the annual “Fiend Fest.” The victim is developer Leland Hode, patriarch of the town’s most powerful family, and he was attacked by someone dressed like the Fiend.

Compelled to discover who is behind the attack and why, Maya uncovers a shortlist of enemies of the Hode clan. The mystery deepens when she finds the journal of a late nineteenth-century spiritualist who once lived in Maya’s house--a woman whose ghost may still linger.

Known as the Blue Lady of Hode’s Hill due to a genetic condition, Lucinda Glass vanished without a trace and was believed to be one of the Fiend’s tragic victims. The disappearance of a young couple, combined with more sightings of the monster, trigger Maya to join forces with Leland’s son Collin. But the closer she gets to unearthing the truth, the closer she comes to a hidden world of twisted secrets, insanity, and evil that refuses to die . . .

Thanks so much for sharing your new release with us, Mae! It's been such a pleasure! I've already purchased my copy of this wonderful book, and I'm sure everyone else will want to do the same!