I am happy to take part in the Cover Reveal for Starr Fall, Book One, a Young Adult Romance Series by my Inkspell Sister, Kim Briggs. Published by Inkspell Publishing, this book will release on November 4, 2016. 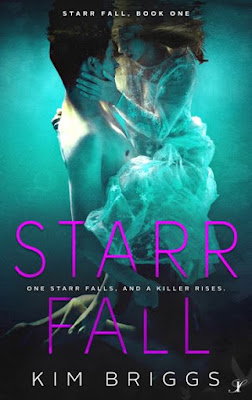 Book One of the Starr Fall Series

On the run from the Organization, Starr never planned on falling in love.

Starr Bishop’s the complete package. A perfect smile, brains to match, and a winning attitude. Boys want to date her and girls want to be her. She’s the type of girl you want to hate, if only she wasn’t so damn likable. But don’t worry, she’s not interested in your boyfriend. Boys are one complication she can live without.

When the Organization decides she’s not only the model student but the ideal assassin, Starr’ll need a lot more than high test scores and extracurricular involvement to get herself out of that commitment.

Dark, moody, and dead sexy Christian Evergood is the last person she’d expect—or even want— to come to her rescue. From opposite ends of Webster High’s social hierarchy, their lives collide in one electrifying moment. Christian isn’t the Goth loner he pretends to be, he’s a part Cherokee, All-American boy who wants to be a hero, Starr’s hero. Christian makes Starr forget that the Organization is after her, but nothing will stop the Organization from collecting their top recruit.

By the way, the spot for junior class president just became available.

I glance up just before plowing into a tall, muscular frame. As our bodies collide, time stops for one brief moment. Strong arms pull me into his black Ramones t-shirt. He shifts his body under mine, drawing me in closer to his chest. His heart races against my cheek; it matches the sprint of my own.

In a tight embrace, we fall as if someone hit slow motion and we drop frame by frame without ever hitting the bottom. Nothing exists in the entire universe except for our plunging bodies pressed against each other. When we finally hit the hard tile floor, he takes most of the impact because I’m cocooned in his arms. Something tightens just below my belly button—a nervous kind of flip-floppy feeling, and I finally understand what Sami and Jody always talk about.

“You,” he murmurs. I gaze into Christian’s black lined eyes with newfound shyness. I never noticed just how blue his eyes are. A blue so deep and pure and clear I’m tempted to swim in them for hours, but the catcalls “Get a room” and rowdy laughter remind me we’re in the middle of the cafeteria with our food deprived classmates, and we’re fresh bait. A burn creeps into my cheeks.

He pushes himself up beside me. Whatever emotion was in his eyes a moment ago vanishes as quickly as it appeared. Two sharp, unforgiving vertical lines form between his eyebrows. Without even a grunt of acknowledgement, he stalks away. I stare after his black t-shirt, wondering what just happened and did he feel it too?

If there was any electricity coursing through my veins, it’s gone now.

Kim once smashed into a tree while skiing. The accident led to a concussion, a cracked sternum, temporary notoriety as a sixth grader returned from the dead, and the realization that fictionalized accounts are way more interesting than just slipping on the ice. 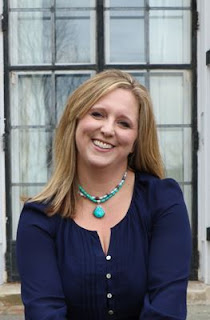 An unhealthy obsession with conspiracy theories combined with a love of travel and happily ever afters led Kim to write her YA novel, Starr Fall, where a secret organization decides Starr Bishop would make the ideal assassin. While in hiding, Starr meets dark, moody, and dead sexy Christian Evergood. Cue the swoon worthy music. But it’s not all happily ever afters for Kim, her NA novel, And Then He, explores the dark and scary corners of the human psyche. Following a night of innocent flirting with a handsome stranger, Tiffani finds herself in the midst of a nightmare she can’t escape. And Then He is available now through Amazon and other major book retailers. Starr Fall will debut November 2016 with Inkspell Publishing.

When she’s not doing something writerly, Kim can be found jumping into snow drifts with her three kids, husband, and dog. She’s careful to avoid trees.

To celebrate Starr Fall’s cover release, Kim wants to give away some fun swag!

One lucky winner will receive a bag of Starr Fall swag including bookmarks, all the fixings for s’mores (once you read the book, you’ll know why), and this… 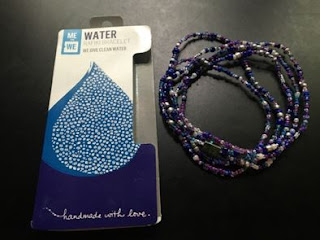 See that little metal tag? It says “Me to We.” Cool huh? You know what else is cool, the purchase of the bracelet bought one month of clean water to a child in a community overseas. Starr’s all about water and making an impact. Kim is too, and she can’t wait to give this bracelet to one lucky recipient. All you need to do is pre-order Starr Fall, then email a copy of the proof of purchase (a screenshot works) to KimBriggsAuthor @ gmail.com (Don’t forget to remove the spaces;)

Winner will be announced on Kim’s Website Monday, October 3, 2016.

I don’t know about you, but I love the cover and the premise of the book! What about you? Let Kim know your thoughts. I’m sure she would appreciate them!