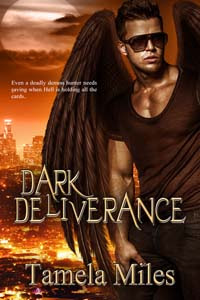 Links:
Facebook Author Page: https://www.facebook.com/Tamela-Miles-Books-350618404965591/?ref=aymt_homepage_panel
GoodReads Author Page:  https://www.goodreads.com/author/show/5397202.Tamela_Miles
Twitter Page: @jackiebrown20
Words of Wisdom:
My newest release coming July 27, 2016  from The Wild Rose Press is #2 in my wonderfully popular Hell On Heels series, entitled "Dark Deliverance". Now having some publishing cred signaled an important transition for me as a writer. I cut my teeth on romances featuring dominant, blatantly sexual Alpha males and, naturally, went from voraciously reading them as a teen to writing about them. All of it was thrilling -  the Alpha coldly trying to put the heroine in her place with a few, well-chosen words, him fighting his attraction and initiating the first deep kiss, him shutting her out of his life for fear of falling, the happy Alpha male ending with the heroine finally submitting to him. Was thrilling? Hmm...still is.

However, I must shyly reveal that, as I've grown older, I've come to appreciate more deeply the sensitive and humorous hero. The kind of man I would date in real life. I decided to depart from my Alpha male roots to explore something gentler but still manly and strong with my character, Patrick Holt, in "Dark Deliverance". He was a tremendously successful experiment gone very right. Patrick has the strength without the brooding, the flirty charm with touches of dark humor. As I was crafting him with page after page of text, he snatched the reins and became larger than life and very real to me. He wasn't just my perfect hero, he was perfect for my heroine, Elle.  If you like a side of laughs with your spooky paranormal romance, check out the team of Elle and Patrick in "Dark Deliverance!

Posted by Debbie Peterson at 5:00 AM