Hello and Welcome Joe! I'm happy to have you here and to learn a little bit more about you and your fabulous new book! 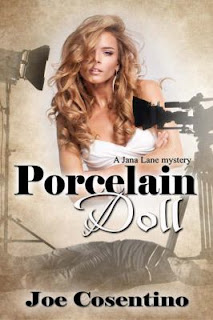 So tell us, what inspired you to become a writer?

After college I became an actor in film, television, and theatre, working opposite stars like Bruce Willis, Nathan Lane, Rosie O’Donnell, Holland Taylor, and Jason Robards. Sorry to name drop! Morphing into writing plays and now novels seem like the perfect progression. I knew my novels would include show business in some way, since show business has always been such a huge part of my life. As an avid mystery reader, it was clear to me that my novels would also be page-turning mysteries with clever plot twists, engaging characters, romance, and lots of clues leading to a surprising conclusion. Since coming from a funny Italian-American family, I also knew humor would play a role in my novels.

Can you tell us a little bit about creating the Jana Lane mystery series?

As a child I loved child stars like Shirley Temple, Hayley Mills, and Patty Duke, seeing their movies over and over. So I created a heroine who was the biggest child star ever until she was attacked on the studio lot at eighteen years old. In PAPER DOLL the secret behind that attack is exposed.
In PORCELAIN DOLL, it is 1982 and Jana is thirty-nine years old, living in a mansion in Hyde Park, New York. Jana makes a comeback film and uncovers who is being murdered on the set and why. Her heart is set aflutter by her incredibly gorgeous co-star, America’s heartthrob Jason Apollo. The other suspects include Jana’s James Dean type young co-star, her older John Wayne type co-star, her children’s Eve Harrington type nanny, the film’s gossipy makeup and hair artist, a local reverend trying to stop the film’s production, and Jason’s agent.
In SATIN DOLL (not yet released), Jana and family head to Washington, DC, where Jana plays a US senator in a new film, and becomes embroiled in a murder and corruption at the senate chamber. She also embarks on a romance with Chris Bruno, the ex-professional football player detective.
In CHINA DOLL (not yet released), Jana heads to New York City to star in a Broadway play, enchanted by her gorgeous co-star Peter Stevens, and faced with murder on stage and off.
Through the course of the books, Jana not only solves the mysteries, but also reclaims the courage and fortitude she had as a child. This is an important message for all of us. As one reviewer wrote, she starts out as a wounded bird, and ends as tiger.

Who is your favorite character in PORCELAIN DOLL? And why?

Jana’s agent, Simon, is my favorite character for five reasons. He is amazingly resilient, old world Hollywood, incredibly funny, loyal to Jana, and most importantly, I want to play him in the TV series!

Which one of your characters was the hardest one to write? And why?

Reverend Charlton, the reverend protesting Jana’s film, was difficult to write since he is so frightening. I could never understand why some people use religion to try to attack and demonize others.

Do you think Christians would be offended by his character?
Jana is a Christian who prays and goes to church on Sundays. She seems like a true Christian to me since she tries to love her neighbor as herself, not judge others, and help the downtrodden and outcasts. Reverend Charlton doesn’t seem very Christian to me since he uses his power and wealth to demean others.

Which one of your characters did you enjoy writing the most? And why?

Jana’s young co-star, Trevor, was fun since he has such a huge ego and is certainly a rebel without a cause

Did you use your background as an actor to write PORCELAIN DOLL?

Definitely! I used my background in each of the Jana Lane novels, since I know the ins and outs on a movie set. Thankfully nobody was murdered on my sets!

I love the music, hairstyles, clothing, and decadence of that era. I had great fun writing about Jana’s mansion, wardrobe, makeup, and hairstyles. I was also able to incorporate some of the music, films, television shows, Broadway shows, and political and social events of the era, including the AIDS epidemic.

What are the difficulties in writing a series?

On the positive side, the leading characters are so real to me, each book is like visiting with old friends. I love Jana and I enjoy every moment with her. On the negative side, for continuity I need to keep a notebook full of information on each character and the various repeat locations—i.e. every room in Jana’s Hyde Park mansion.

How do you handle writing love scenes?

Lovemaking is a part of life, so it makes sense to include love scenes in novels. The love scenes in my books are pretty tame compared to many. I have been told they are sweet and touching.

Do you have another mystery series besides the Jana Lane mysteries?

Yes, the Nicky and Noah comedy mysteries published by Lethe Press. Since I am a college theatre professor/department head, the series takes place at an Edwardian style New England college. In DRAMA QUEEN (Divine Magazine’s Readers’ Choice Awards for 2015 winner for Best Mystery, Best Humor, Best Crime, Best Contemporary) theatre college professors are dropping like stage curtains. With the inept local detectives, it is up to Directing professor, Nicky Abbondanza to use his theatre skills (including playing other people) to solve the murders, while he directs a murder mystery onstage. Complicating matters is Nicky’s intense crush on Assistant Professor of Acting, handsome Noah Oliver, the prime suspect in the murders. In DRAMA MUSCLE Nicky and Noah have to use their theatre skills to find out why musclemen are dropping like weights in the Physical Education department while Nicky directs the Student Bodybuilding Competition. In DRAMA CRUISE (not released yet), Nicky and Noah go on a cruise to Alaska, and discover why college theatre professors are going overboard like lifeboats while Nicky directs a murder mystery dinner theatre show onboard ship. The series is so entertaining, it has vast crossover appeal. My colleagues kid me that if they tick me off, I will murder them in the next book. Hah.

What are you writing now?

Ragdoll, the next Jana Lane mystery, where Jana stars in a TV murder mystery series. You guessed it! Life imitates art yet again.

Who is your ideal reader of your books?

A lover of mystery, romance, and Hollywood. Someone who craves being swept away by a story and becoming part of the novel. My reader loves clues, suspects, and plotlines that zigzag with numerous surprises leading to a shocking yet totally justified conclusion. Finally, my reader relishes in beautiful, lush locations and captivating characters as she/he enters the portal of my book.

I love hearing from readers. They can contact me here.

Blurb:
Is art imitating life in 1982? Jana Lane, ex-child star, is doing a comeback film about murder. When a crew member is killed on the set, it looks like Jana could be next. Thickening the plot is Jana’s breathtakingly handsome and muscular leading man, Jason Apollo, whose boyish, southern charms have aroused Jana’s interest on screen and off. Will Jana and Jason stop the murderer before the final reel, or end up on the cutting room floor in this fast-paced whodunit with a shocking ending?

Praise for PORCELAIN DOLL, a Jana Lane mystery:
“Porcelain Doll is Joe Cosentino at his finest. We are drawn back to the fashions and attitudes of the 1980's in a character-driven story full of intrigue and passion." Kirsty Vizard, Divine Magazine

“Beautifully written and intensely detailed, Porcelain Doll is one not to be missed. Flirtatiously decadent with a strong moral undertone, set in a decade of extraordinary social change this is a story of its period that is as poignant today as it was then. Joe Cosentino controlled the emotions that the book encouraged with a deft but delicate touch. Suspenseful and mysterious, Porcelain Doll is a masterful creation, one that was impossible not to be affected by.” Carol Fenton, BooksLaidBare Reviews

Praise for PAPER DOLL, the first Jana Lane mystery:
“Paper Doll is a superbly crafted mystery with an eclectic cast of characters that will engage you and elicit some very emotional responses as you are completely caught up in the events that unfold in these pages. Everyone has secrets and the people in Paper Doll have them in spades!” Fresh Fiction

"Mr. Cosentino has produced a masterpiece of mystery" "The story gripped me from the start and there were enough twists and turns, with a bit of romance thrown in for good measure, to keep hold of me until the end of the book." "Great book, can’t wait for book 2." Readers’ Favorite 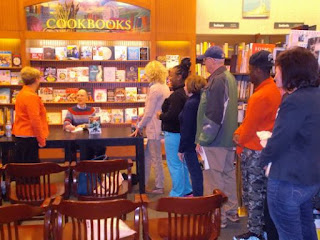 An Excerpt of PORCELAIN DOLL, a Jana Lane mystery, by Joe Cosentino
Published by The Wild  Rose Press

As Jana sat waiting for Jack to call for action, she looked up at Jason’s encouraging face. She again was taken aback by his incredible beauty.
Reverend Charlton and Gloria reentered the study.
Jack called for quiet and action. Jana and Jason played the scene, where the detective notifies her of her husband’s death. Jason delivered his lines with warmth, vulnerability, and obvious affection for Jana. In turn, Jana listened then reacted with deep emotions, conveying shock, loss, fear, and hysteria while being comforted by the man she trusted. Jana clutched onto Jason with such force, her fingernail accidently tore a hole in his jacket.
“Cut!” Jack hollered.
While the wardrobe woman repaired Jason’s jacket, Jana noticed Reverend Charlton step out of the study again, this time with Ryan O’Halloran.
After the two men returned, and the jacket was mended, Jack called for slate and action for take two. Jana and Jason did the scene two more times. Each take was more realistic and heart-wrenching than the next, and each appeared as if it were the first time Jana was given the sad news.
After the third take, Jack shouted, “Cut! It’s a wrap. Ryan, let’s move on to the next location.”
Jana wiped the tears from her cheeks.
Jason placed his hand on the side of her face. “You’re amazing.”
“You’re not so bad yourself, partner.”
“You make me better,” he said with adoration in his true-blue eyes.
They shared a smile as again people hurried around the room like ants after a picnic.
Suddenly, Jana heard a loud crash followed by a scream. Leaping from her chair, she followed the horrified gazes of the others in the room to Ryan O’Halloran lying motionless on the floor with a Fresnel tungsten shuttered light next to his head, and blood dripping from his scalp onto the hardwood floor.

Posted by Debbie Peterson at 4:30 AM