Helen C. Johannes, Author of Bloodstone & The Prince of Val-Feyridge...

I am so excited to have the very talented Helen C. Johannes visiting with me today as she speaks a little bit about the craft of writing and gives us a look at her exciting fantasy romances!

I’m Helen C. Johannes and I write fantasy romance for The Wild Rose Press. Thank you, Deb, for kindly offering to host me on your blog. I’ve given some thought lately to the fine art of writing, and I have a point I’d like to discuss. I’d be delighted to hear your thoughts on this:

“Write what you know.”

That’s the advice given to aspiring writers. And it’s basically good advice. No one can write authentically about a career, place, time, or situation without having ‘knowledge’ of it. Aspiring writers of suspense and crime fiction, for instance, ought to know what a police detective or private investigator really does before attempting to write a story around such a character. Stories fall flat when the author’s ‘knowledge’ fails in the eyes of a reader or editor.

How does the aspiring writer fix this problem? He or she does research.

This is all well and good for the writers of contemporary fiction. Even for historical writers. We can find out details of a surgeon’s work, the streets of contemporary New York, Amelia Earhart’s life, and cave paintings in France. We have the Internet, after all. And books, people to interview, and libraries with stacks to comb.

What about those of us who write about things that never were?

When you set a world in a place that doesn’t exist, how can you “write what you know”?

Oddly enough, you can.

What you’re doing is taking authentic human experiences and… tweaking them.

For instance, I’ve never lived as a cursed warrior in a land populated by beast-men as my hero does in BLOODSTONE, but I have experienced a high mountain meadow in spring, ridden horses, and learned about panning for gems from my father’s experience in Alaska. I’ve never lived in a land where people fend off danger with swords, but I’ve travelled in the UK, hefted a sword to learn about balance, and explored tumble-down castles. I’ve never lived with a mountain lion, but I’ve lived with a lot of cats, and I can model my Wehrland lion after them.

All it takes is a bit of imagination to turn a fragment of authentic experience into satisfying and convincing fiction. So, write what you know… and tweak it. 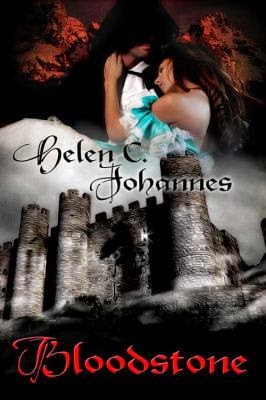 BLOODSTONE, 2011 Launching a Star Winner in Fantasy Romance, The Wild Rose Press
Blurb:
What if looking at the face of the man you loved meant death?
Years ago, warrior Durren Drakkonwehr was cursed by a mage. Now feared and reviled as the Shadow Man, he keeps to himself, only going to town to trade rare bloodstones—petrified dragon’s blood—for supplies. Though he hides his face, he can’t hide his heart from the woman who haunts his dreams…
Needing bloodstones for a jewelry commission, Mirianna and her father journey across the dreaded Wehrland where the beast-men roam. When their party is attacked, only the Shadow Man can save them. Strangely drawn to him, Mirianna offers herself in return for her father’s rescue.
Living in the ruined fortress with the Shadow Man, Mirianna slowly realizes that a flesh-and-blood man, not a fiend hides there in hoods and darkness. But are love and courage enough to lift the curse and restore the man?

“What about us? What do we do?”
Only the hood rotated, cocking with exaggerated deliberation. “Why, you die, old man.”
Her father blanched. His grip on Mirianna’s arms faltered.
She saw the Shadow Man turn, saw the muscles of his thighs bunch as he prepared to leap down the hillside, saw, in the corner of her eye, shapes gathering along the tree line below, horrible shapes she’d seen only hours before rushing at her from a darkened clearing. With a shudder, she broke from her father’s grasp.
“Please!” She reached out to the black sleeve. “Help us!”
He recoiled at her touch like one snake-bitten. The sudden, sharp focus of his regard staggered her, but she backed no more than a step. No matter how he terrified her, he’d helped her once. She’d been led to him again, and not, her instincts told her, without reason.
“Please,” she repeated. “Help us. I—we’ll do anything.”
“Anything?”
His voice was a whisper that caressed flesh. Mirianna’s stomach quivered. Her breasts tingled. Her mouth grew even drier. Without thinking, she slid her tongue along her lips. Vaguely, she wondered what she’d done. And why time seemed suspended, as if everyone but she and the Shadow Man had been cast in stone and all sound arrested. All sound except the taut, guttural repeat of his question.
“Anything?” 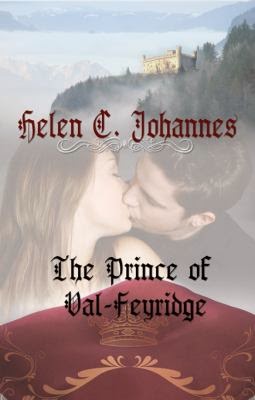 THE PRINCE OF VAL-FEYRIDGE, 2011 EPIC Winner in Fantasy Romance, The Wild Rose Press

Blurb:
A warrior with a destiny, a woman with a gift. Can loving the enemy restore a broken kingdom? Or will forbidden love destroy it—and them—first?
Prince Arn has a destiny—an ancient throne—but he’s not waiting for fate to deliver when he can act now, before his enemies organize against him. The healer Aerid longs for her barely remembered homeland. Marked out by her gift and her foreign looks, she insists she is no witch. The swordsman Naed hopes to honorably defend his uncle’s holding, but he harbors a secret fascination for the exotic healer. Prince Arn’s campaign against Aerid’s homeland throws them into a triangle of forbidden love, betrayal, and heartbreak. Only when they realize love is blood-kin to friendship, and neither is possible without risk, can they forge a new alliance and restore a kingdom.
Excerpt:
The Prince’s arm tightened, drawing her hard against the planes of his chest.
Aerid sucked in breath, digging her fingers once more into his tunic sleeve. Every movement reminded her, perched sideways as she was on the saddle pommel, all that kept her out of the water and away from trampling hooves was the strength of his arm—and that arm was trembling. Not with the fear still rattling through her, for he was Tolemak and a warrior. Nor with weakness, though the wound she had stitched a scant seven-night before could yet give him cause.
No, in that moment when he had recognized her—in that awful moment after the shock—she’d seen all too clearly the fury vibrating through him now. And the knowledge that it had not abated even a whit made her flinch when he bent and his voice lashed at her ear.
“Tell me, witch, and tell me true—does Krenin know who you are?”
The question itself startled Aerid, not its harshness, for she had expected that. Twisting her head, she caught a glimpse of eyes like coals in a face dark and set.
“I mean,” he said, each word measured and knifesharp, “either who you are or who you pretend to be.”
She flushed, knowing full well what he meant. “I—I think not, m’lord. ‘Twas dark and—”
“Then you’ll do nothing to enlighten him. Hear?”
She heard him clearly despite the water-song and hoof splashes she was sure prevented their voices from carrying to Krenin. She understood, too, what underlay his warning. He wanted no one to know that he, the exalted and invincible Prince of Val-Feyridge, had been tricked—trapped—into sparing the life of an Adanak—and a woman!—only to cover the fact he and all his army had been duped into believing—for weeks!—that she was a boy, and a D’nalian. Oh, he had chosen well the moment for his question, Aerid thought, a rush of indignation beating back her shivers.
“Aye, m’lord, ‘tis safe with me, your secret.”

Author Helen C. Johannes lives in the Midwest with her husband and grown children. Growing up, she read fairy tales, Tolkien, The Scarlet Pimpernel, Agatha Christie, Shakespeare, and Ayn Rand, an unusual mix that undoubtedly explains why the themes, characters, and locales in her writing play out in tales of love and adventure. A member of Romance Writers of America, she credits the friends she has made and the critiques she’s received from her chapter members for encouraging her to achieve her dream of publication. When not working on her next writing project, she teaches English, reads all kinds of fiction, enjoys walks, and travels as often as possible.

That's some very good advice Helen!  Thank you so much for sharing and readers? Let Helen know what you think!