I am so excited that author Susan Aylworth agreed to pay us a visit! She's going to tell us a little bit about herself and her newest novel, Zucchini Pie: Granny's Recipe For Life...

(And... for all of you cooks out there? Each chapter begins with a fabulous recipe used by her characters. These recipes include sourdough bread, homemade salsa, pasta carbonara, Amish Oat Breakfast, tamales, hummus and dolma! You wont want to miss that!) 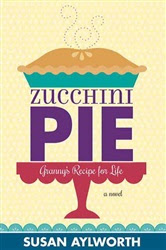 What inspired you to write your first book?

I was nine years old and horse-crazy, so I got out a yellow legal pad and one of those big, third-grader pencils to write the first ten pages of BUFF, THE PROUD STALLION. I never finished it and the horse was black, not buff. Who knew buff was a color?!

Is there a message in your novel that you want readers to grasp?

In the acknowledgements, I credit actor Carrie Fisher with the quotation: "Resentment is like drinking poison and waiting for the other person to die." My son John asked why so many of my books deal with similar themes, but that one's easy: The failure to forgive dams up forward progress and keeps us stuck in a mind loop. We can't move on to become what we are intended to be until we let go of the past.

If you had to choose, which writer would you consider a mentor?

Debbie Macomber is a mentor and friend who wrote a cover blurb/recommendation for my Avalon hardbacks in the late 90s. She also taught me a writer can maintain high values and still do well in the marketplace. I'm deeply indebted to her.

Which genre are you drawn to as a reader?

I have written mostly romances and relationship stories, but I read almost everything. I'm addicted to good stories and devour them voraciously.

Are there any new authors that have grasped your interest?

New to me: Michaelene McElroy. Her book THE LAST SUPPER CATERING COMPANY is quirky, fun, and a good, clean read. I was also charmed by AN ENGISHWOMAN'S GUIDE TO THE COWBOY by June Kearns, a fun Victorian romp that's also sweet and clean, and by Catherine Ryan Hyde's WHEN YOU WERE OLDER, a more sobering story. I'll read anything by Heather B. Moore.

Name one entity that you feel supported you outside of family members.

I've already mentioned Debbie Macomber, a jewel of a friend. Rubbing elbows at national conferences (sometimes literally when in crowded elevators) with some of the industry's best-known authors and hearing their stories both challenged and inspired.

Can you share a little of your current work with us?

My WIP is the 7th book in the Rainbow Rock series. Marcie Carmody, the teen from book #4 all grown up now, has just come around the corner to find a man in a dark hoodie rifling through files in the legal office of Logan Redhorse where she plans to start work the next week. She has called the police:
The officer led her through a long series of questions: how she knew who should and shouldn’t be in these offices, where she worked now, what contact information she had for Logan Redhorse, and finally, why would anyone want to burglarize an office that wasn’t even fully occupied?
“Logan handles contracts for the Navajo Nation, and some of them—especially the coal leases and other mineral rights—are worth millions. That’s reason enough for industrial espionage, a rival trying to get insider information on the prevailing contracts so they can outbid the current lease-holder when the contracts expire.”
The officer gave her a skeptical look. “It’s happened before,” she said. “At Logan’s offices in Window Rock.”
The policeman made notes and mumbled, “Happened before, huh?” Behind him Marcie watched as the other officers led the handcuffed suspect outside and helped him into the back seat of a patrol car. He was eagerly protesting, but they were taking no chances. She couldn’t help noticing how tall he was. Tall and impressively built. He looked clean-cut and Marcie could easily see why he might be good at this sort of white collar crime. “Miss Carmody? Ma’am?”
Marcie snapped her attention back to the officer who had apparently just asked her another question. “I said, do you have any photo identification?”
“Oh. Yes.” She reached into her purse for her wallet. “Driver’s license okay?” She was pleased she had already received her updated Arizona license. The one from California might not have leant the same credibility.
“Yes, ma’am.” The officer made another note. “Looks good. Thank you, Miss Carmody. We’ll call you if we need you.”
“Thank you, sir, and thank all the other officers who responded.”
“I’m sure Mr. Redhorse will be pleased with the way you’re looking out for his interests.”
“I certainly hope so.” Marcie watched as the third officer got into his car and pulled out. She wondered if she should call Logan and let him know what had just happened.Maybe the officers take care of that? She was still pondering when her cell phone whinnied, the ringtone she had designated for Logan.
“Hi, Logan. I guess the police called you, huh?”
“They certainly did. Listen, Marcie: I’m going to send you a photograph of Ryan Fields, the new associate we talked about? After you’ve seen it, I’d like you to go down to the police station and please get our new colleague out of jail.”
“You mean… Oh no. Oh Logan, I’m so sorry! I didn’t think he’d be here yet and when I saw someone going through your files, I thought—”
“He was going through his files, trying to get moved into the office. Wait just a second… There, I’m sending the picture. Is this the man you saw?”
Marcie looked. She’d been fifty or sixty yards away and the man she saw was wearing a hood, at least until the officers escorted him outside. Still, she had no doubt she was looking at a picture of her new boss. “Oh. Oh Logan. I can’t tell you how sorry I am—”
“Save the apologies for Ryan. He’s feeling a bit … miffed just now.”

Do you have to travel much concerning your book(s)?

Have to? Not usually, but sometimes I get to. Right now I'm researching a major historical novel, my most ambitious work yet, about the life of Lorenzo di Medici. That involved having to spend two weeks in Florence last year. Ah, the sacrifices we make for our work!

What was the hardest part of writing your book?

In any work, the worst is always recognizing the less pleasant parts of myself that show up in my characters. Seeing myself in noble characters is fun; seeing my flaws makes me wince.

Did you learn anything from writing your book and what was it?

ZUCCHINI PIE is my first book outside the romance genre and my first to attempt multiple viewpoints. I couldn't begin to enumerate everything I learned. What a great experience! I found some fun recipes, too.

Do you have any advice for other writers?

Hang in there! Even if youdon't have the talent or the skill to become a pro, your story is worth telling and the skill develops as you work at it.

Do you have anything specific that you want to say to your readers?

Tell us one thing that would surprise us to know about you?

I'm a professionally trained percussionist, but I also play "the drums, including a few gigs in the distant past.

What is your favorite type of food?
Anything with an extravagant calorie count. Sad, huh?

Do you have a song that you'd consider the theme for your novel?

I'd write a new one called "I Am A Child of God--and so are all the people who have hurt my heart."

When Karen Burnett receives word that 100-year-old Granny Adelaide is fading fast, she and her husband rush to the hospital to say their good-byes. As the end draws near, Granny reveals her dying wish: she wants each member of her fragmented family present at her funeral, as well as at a lunch featuring nostalgic family foods. In her last breaths, she calls upon her granddaughter-in-law, Karen, to carry out this seemingly insurmountable task. With cherished recipes in hand and a determination to follow through, Karen sets Granny’s plan in motion. But Karen’s husband, Tom, is less than enthusiastic about his grandmother’s meddling. He hasn’t seen his father—the man who abandoned Tom, his mother, and younger siblings--in decades, and the years have done nothing to diminish his bitterness. As the day of the funeral approaches, Tom must decide: will he allow himself to be consumed by his anger, or will he embrace the potential for peace? Zucchini Pie is a heartfelt novel of connection: of a struggling family and the food that one wise old woman trusts will bring them back together.

Susan Aylworth is a professor emeritus of English at California State University, Chico, where she taught for 30 years, a wife of 43 years, mother of seven children, Gramma to 21, and author of ten novels. She loves poems, plays, words in almost all polite forms, and good raspberry jam. She lives in northern California with her husband, Roger, a dog called Pirate, and two quirky cats. Like most women of her generation, she wishes the grandkids would visit more often.

You can get the book: