So, as we continue our tour of lonely spirits and haunted places from America’s early history, we arrive at the former Wayside Inn (circa 1704), and/or the General Wayne Inn (the name the building acquired in 1793), built on land purchased by William Penn. Some call this place, “the most haunted house in America.” And indeed, the General Wayne Inn boasts an intriguing menagerie of otherworldly residents over its three hundred and eight year sojourn. 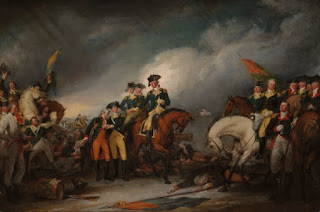 Throughout the Revolutionary War, many battles were fought in the area that surrounds the Inn. According to various reports, during one of those battles, a British officer and two Hessian soldiers were fatally wounded very near the place. As the Redcoat lay dying, someone filched his prize locket. There are those who believe this officer has remained earthbound for the need to locate this locket. Several witnesses say the man even includes the living in his search. (So, if you're in the area, watch your pockets).

And what is a haunted house without the haunted basement door? There are numerous accounts of a Hessian soldier (either one of many, or this soldier is awfully busy) locked inside the basement room. He knocks, hoping someone will let him out. (Just as an aside, various mediums have counted up to eight Hessian spirits, haunting the Inn.)

Oh, and then there’s the unseen phantom who has naught but admiration for the ladies who visit the bar. Many of these patrons feel someone blowing on the back of their necks. Yet, when they turn around, not a living soul is there...

Another Hessian soldier account (do you see shades of Sleepy Hollow here?). A staff member once saw this particular entity, standing on the steps just as he faded away. The interesting thing about this ghost is that he appeared just as surprised at seeing the living staff member, as the living staff member was about seeing the dead solider—a “twilight zone” moment, if I ever saw one. But then again, how often do mortals consider the experience of the ghost during these encounters?

Back to the basement, and another Hessian soldier by the name of Wilhelm. This spirit is searching for his uniform, which his superior officer callously stripped from his body upon his death in order to clothe another. Thus, they buried Wilhelm in his underwear. According to him, they even stole his brand new boots. He’s not happy about that. Wilhelm is searching for his belongings so that he can be properly buried.

The Inn is an ethnic melting place, with American soldiers, Native American and African-American phantoms observed by various witnesses. In 1986 the owner of the Inn, alongside his friend, saw the image of a woman in period dress, running through the dining room. And many patrons over the years, report hearing the cries of a young boy, who lost his mother.

Perhaps bored for the length of time they have maintained their residence at the Inn, some of our friendly spirits have resorted to mischievous pranks. You see, it’s not an uncommon thing to see towels and appliances defy gravity. Or witness said items being tossed about the place. The playful poltergeists also take delight in opening the doors which the managers locked up tight the night before.

Sadly then, on 26 December 1996, the current owner of the Inn shot and killed his partner, James Webb. According to court documents, he terminated his partnership to collect on a $650,000 insurance policy, because the Inn was losing money. No one has ever said whether or not Webb became one of the ghostly residences and most likely we’ll never find out. In 2004, the Inn was sold and converted to the “Chabad Center for Jewish Life.”

Do the ghosts still haunt the place after its drastic remodeling or did they seek a more amiable abode? Time will tell. Free of ghostly inhabitants or not, the Center still honors the established roots of the inn, for prominently displayed on the side of the building are the words: "General Wayne Inn. You can’t miss it!

So, tell me, how would you handle a houseful of entities, if the house they lived in was yours?

The Wild Rose Press has just announced
an early, 1st edition release of :
“Spirit of the Revolution,”
through Amazon’s kindle select program.
If you have a kindle you can get your copy today!
(Shameless... I know...)

Posted by Debbie Peterson at 2:44 PM