Legend of the Arapaho Warrior and his Ethereal Visitor

A bit of background. Historians tell us that the Arapahos lived on the eastern plains of and after migrating from and . They lived in transportable tipis so they could follow the bison, and provide meat for their families. They were skilled hunters. Therefore, they had plenty of hides to attend their needs and some to spare. They became great traders and often sold their furs to whoever might desire them. Until they encountered the horse, they used a team of dogs and the travois to move from one place to another.

As with all cultures, the Arapaho have their own spooky stories... Tales of ethereal creatures that rove around in the dark...

They give us a legend that originates long before the coming of the horse and it goes something like this:

On a particular day during a lengthy hunting trip, a group of Arapaho men maneuvered across some pretty rough terrain. The hunt had taken them near some mountains and a shallow stream they needed to cross. In so doing, one of the young warriors felt a sudden and excruciating pain in his ankle as he traversed the rocky bed. The warrior persevered and despite his pain, kept pace with his companions until they pitched camp. But come the morning, the swollen ankle of our intrepid hero, prevented him from traveling any farther.

His companions provided a crude shelter. They gathered enough firewood to sustain him for a few days, left him with food and instructions to return to the tribal camp when he felt well enough to continue his trek. 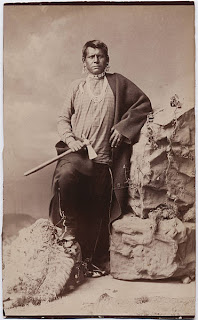 That night, a blizzard hit. Our hero found himself imprisoned within his shelter for several days. However, at times, nature can relent and provide resources for survival. One afternoon, while approaching the end of his supplies, our warrior finally spied some buffalo rooting in the snow. He retrieved his bow and stealthily... (I’ll spare you the details of the gory kill...)

After skinning the animal and carving out a generous portion, he retreated to his makeshift shelter, fired up a pit of coals, and roasted his dinner.
Just then, the crunch of footsteps on the new-fallen snow entered the ears of our hero. He re-armed himself and waited. The flap of his shelter flung open and... a skeleton, dressed in a tanned robe entered his domain. In that moment, our hero’s anxiety level escalated, as one might expect. Our phantom assured our warrior that all was well, and not to be frightened. “I have taken pity on you,” the apparition whispers hoarsely. “Now you must take pity on me. Give me some of those ribs you've roasted to eat, for I am very hungry. While I eat, I’ll tell you a story.

“It was I who gave you the pain in your ankle,” revealed the phantom. “It was I who caused your ankle to swell, so you could not follow your brothers. If you had followed them, you would've lost your life as they have lost theirs.” The specter told the warrior that a war party attacked and killed his comrades. “It was I who saved you,” he said. Then, he stretched forth his bony digit and rubbed the warrior’s ankle, healing it in the same instant. “Now you can walk again, and though your enemies are still abroad, I’ll lead you back to your village.”

True to his word, the ghoulish phantom led the warrior away from his shelter. They traveled many miles together. Finally, after leading him up an incline, the warrior could see his village and the smoke from the village fires. In that same instant, his ghostly companion vanished.

So, it would seem from our Arapaho tale, not all otherworldly beings are bad, nor are all of them good. And, some of those creepier things out there might just turn out to be your guardian angel...