Every now and then I have the pleasure of inviting a guest--who loves the paranormal as much as I do--to contribute a post. Today is one of those days. I am excited to welcome Summer Siquian, who will tell us a little bit about the Pacific ghost ship known as Joyita!

There is a great deal of mystery surrounding Joyita, a missing ship found partially afloat and void of any crew members. In time she became known as the Pacific’s ghost ship. 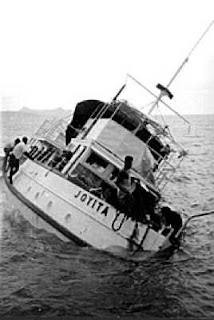 This 69 foot luxury yacht was built in 1931, for movie director Roland West. He named the ship Joyita, which translates to little jewel in Spanish, as a tribute to his wife Jewel Carmenille. In 1941 the US Navy acquired the yacht and took her to Pearl Harbor and outfitted her as a patrol ship where she patrolled the Big Island until 1943. The Joyita changed hands multiple times until a professor, Dr. Katherine Luomama of Hawaii bought and allowed her friend, Captain Thomas H. Miller to charter the boat. He used the boat for fishing and trading for three years until the mysterious disappearance occurred.

On October 3, 1955 the Joyita departed from Apia Somoa and headed for Tokelua Island about 270 miles away, with passengers and crew totaling twenty-five, cargo of medical supplies, lumber, empty oil drums and food. They were due to arrive in Toklua Island within 48 hours. On October 6, 1955 officials declared them both overdue and missing, with no confirmed distress signal. A search was launched by Sunderlands and the Royal New Zealand Air Force. They searched for six full days and over 100,000 square miles of open ocean. They didn’t find any sign of the Joyita or her crew. 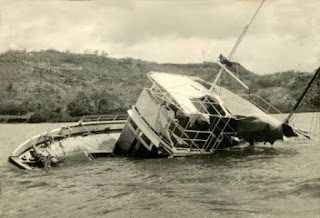 November 10th, nearly 5 weeks later, the Joyita was found by Gerald Douglas, captain of a merchant ship. He spied the partly sunken ship about 600 miles away from Joyita’s original destination. Upon closer inspection, he found the Joyita empty of captain and crew. All the cargo was missing, as was the captain’s journal, all navigation equipment, life rafts and dinghy. He also noticed the radio was set to the international distress station. The only thing that remained onboard was the doctor’s bag, a stethoscope, a scalpel, and four blood stained bandages. It was believed these items were the property of World War II surgeon, Dr Alfred Denis Parsons, a known passenger of the Joyita.

Investigators suggested that whatever occurred probably happened at night because the electronic clock had mysteriously stopped ticking at 10:25. In addition, the captain’s cabin light as well as the navigation lights was still on. To this day there is no evidence as to what occurred the fateful night of October 5, 1955. There have been many theories. Some say pirates, kidnapping, or phantom waves. Some suggested the captain and crew witnessed illegal fishing and were silenced. There are those who have gone so far as to blame alien abduction, the legendary kraken, or a Bermuda Triangle type vortex for the disappearance of captain and crew.
After the incident, whatever the cause, the ship was sold and repaired. It became a trade ship where bad luck seemed to follow. The ship ran aground in 1957 and again in 1959. After that, the Joyita was sold to Robin Maugham who wrote a book concerning the mysteries surrounding the Joyita. Robin later sold it to Major Casling-Cottle who ran a tourist and publicity bureau in Levuka. The 69 foot wooden yacht slowly disintegrated over time.

To this day, the crew is still declared missing and the reasons for the Joyita’s mishap have been consigned to legend.

So what do you think? Accident? Mutiny? Or do you think something far sinister claimed the ghost ship of the Pacific? I'm opting for something a little more sinister...

Thank you so much Summer! We've so enjoyed your post. I hope you'll consent to visit us again!

Posted by Debbie Peterson at 6:41 PM