Of Haunted Castles and Book Covers....

I read it one more time for good measure, took a deep breath...and hit the submit key. That didn't stop the butterflies from swarming though. It happens each time I fill out the information sheet required for my cover art. And why? Because all the while I am writing my books, I envision the perfect couple in the perfect setting to grace the cover. To date, my covers haven't even come close to the one I imagined. 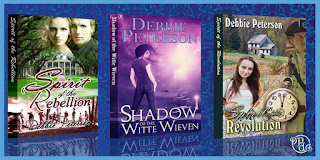 Not unexpected, but  more often than not, somehow disappointing nonetheless.

Now, in regards to my newly contracted novel, "Spirit of the Knight",  I'm hoping a medieval castle graces the cover, if even off in the distance. After all, there were many such castles that influenced my fictional castle in the novel.  And in light of that fact, l decided to treat you to a couple of them today...

Eilean Donan, built in the 13th century, sits on an island and is surrounded by three lochs.  The castle is both breath-taking and mysterious. It's also haunted. According to a plethora of witnesses, a 17th century Spanish soldier, killed during the Jacobite rebellion is often seen carrying the head he lost in battle... Apparently his favorite place to haunt is the gift shop, so if you're not of a mind to encounter a ghost, perhaps you should do your shopping elsewhere. Oh, and Lady Mary still hangs around the castle as well. She is usually found in one of the bedrooms of the castle.


Roslin Castle, built in the 14th century, sits near the village of Roslin in Midlothian. At one time this magnificent fortress housed the Sinclair Earls of Orkney and Caithness.  The ghosts of this castle include the apparition of a dog and a ghostly knight in black armour, who rides a black horse across the bridge, heading toward the castle ruins.  I suppose only he knows the reason for this never-ending errand.

There isn't a whole lot left of Dunstanburgh castle. Yet the ghosts and legend attached to it could feed any author's imagination. Thomas Plantagenet, Second Earl of Lancaster built the structure during the 14th century. In its lifetime the castle witnessed several battles during the Wars of the Roses. Throughout those battles, a new victor claimed the fortress at least five different times. During each of those skirmishes, cannon fire destroyed a little more of the castle. Despite its empty shell, Thomas Plantagenet, along with a few other ghosts call the castle home...

You see, Thomas fell out of favor with his cousin King Edward II and ultimately, the king had him executed for treason in the year 1322.  Unfortunately for Thomas, the executioner needed eleven strokes to remove his head. Therefore, we have reports that the ghost of our Earl,  complete with a visage of intense agony, wanders about the castle. Margaret of Anjou, wife of King Henry VI, is also said to still be in residence.


And then we have the tragic specter of Sir Guy. They say that during a torrential storm, the gallant knight sought immediate shelter. He found it amid the ruins of Dunstanburgh.  While he waited out the tempest within the turrets of the gatehouse, a ghastly figure suddenly appeared before him, and beckoned the knight to follow. For so doing, Sir Guy would find a "Beauty Bright" as his reward said the ghost.  And so he followed.


At the top of the narrow, winding stairway, the ghost led our knight into a chamber, wherein hundreds of knights lay sleeping alongside their horses.  At the very center of the room he spied a casket made of crystal and within that casket slept the most beautiful maiden the knight had ever seen.  Two serpents stood as sentinels. One held a horn, the other a sword. The ghostly guide told Sir Guy he could rouse the sleeping beauty if he made the correct choice. But which would awaken her...the horn or the sword?

Sir Guy chose the horn. But the call of the horn woke up the knights and together, they rushed toward him with swords drawn. The frightful sight caused Sir Guy to swoon and just before he lost consciousness, the ghost approached him and said, "Now shame on the coward who sounded a horn, and the knight who sheathed the sword."

When our knight awoke, he was once again in the gatehouse. For the rest of his long, miserable, life he sought the beautiful maiden, but could never find her again.  Some say that on stormy nights, you can still find Sir Guy walking the grounds and climbing the staircases in the hope of finding his beauty bright at long last... (do you see a fairy-tale in there?)

What do you think? Should "Spirit of the Knight" have a castle on its cover or not...

Do you judge a book by its cover?

Posted by Debbie Peterson at 9:59 PM