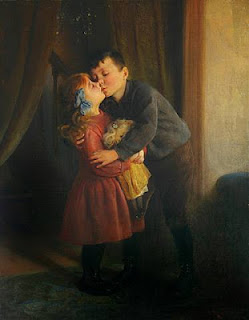 Loki the Trickster, and enemy to Baldr, realized that Frigg had overlooked the mistletoe because it didn’t plant its roots in or on the earth. This plant attached itself to the limbs of apple and oak trees. Knowing this, the cunning Loki made an arrow tip from the mistletoe. He gave it to Hoder, the blind god of winter while the gods were making merry with Baldr by pelting him with all manner of things that refused to bring him injury. When Hoder shot the arrow provided by Loki, it pierced Baldr’s heart and killed him. The sky grew dark, and all things in heaven and on earth mourned. Frigg bitterly wept and the tears that coursed down her cheeks dropped down upon the mistletoe and turned into the pearly white berries that now adorn the bush.

In a combined effort, the gods restored Baldr to life. In her joy, Frigg kissed everyone who passed beneath the trees on which the mistletoe grew. Our tale concludes with a decree that all those who stand beneath its branches should receive a kiss as a token of love...

Mistletoe is considered a plant of peace in Scandinavia.  Under its boughs enemies could call a truce and warring couples could sweep away their petty arguments and with a passionate kiss, begin their relationship anew. As time passed and traditions evolved, a “kissing ball” made of up mistletoe, evergreens, ribbons and ornaments was created. At Christmas time the young ladies who stood beneath it could not refuse a kiss that sometimes had some very interesting and romantic consequences... 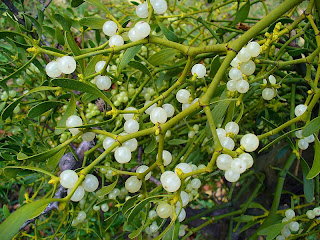 And I for one, am glad this lovely Christmas tradition has survived...

Posted by Debbie Peterson at 10:14 AM